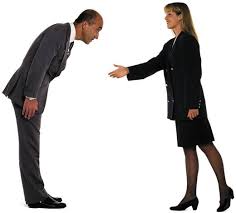 Among its characteristics, nonverbal behavior is commonplace, it is an important part of social interaction, it is not pan-cultural, and it is culturally acquired. Each of these facts will be explored briefly.

Our ignorance about body language stems partially from the fact that we were taught that spoken words are the raw materials of speech. As the effect, we failed to learn that a smile, a frown, a nod, a bow, a clenched fist are among the many nonverbal acts that also serve as a powerful communicators, each without words.

Nonverbal communication constitutes an important part of our everyday social interaction. As a result, we cannot hide the truth very well nonverbally because nonverbal messages are free of the distortion and confusion found in verbal language.

Nonverbal communication is not pan-cultural. By that we mean that nonverbal communicative behaviors do not carry the same meaning across cultures. Rather, only a few of them; laughing, frowning, crying, have universal significance.

From our culture we learn the meaning, unconsciously for the most part, and how, when, and where to use these nonverbal behavior. On the other hand people from other cultures learn as we do; the meaning are determined by their cultures. Unfortunately, when we met someone from a foreign culture, we most likely will interpret their nonverbal behavior as we would our own. Misunderstandings often result.

The Nature of Nonverbal Behavior

We must be careful not to make erroneous judgments about the behaviors we observe. So, our conclusion about what we see should remain tentative. The possibility always is present that what we think an action represents is not that at all. Above all, meaning is in us, not in the actions we observe. However, the meaning we give to what we observe may be completely different from what was intended.

Suppose a strange man were to walk into a bathroom where a young lady was bathing. How would the young lady react? The answers vividly show how dissimilar cultures react with varying gestures. For example, woman of Sumatera would cover her knees. A Samoan would hide her navel. A western woman would cover her breasts with one hand and her genitalia with the other. In other words we can say that body movements transmit a variety of messages. In conclusion, some movements convey emotions; others carry information about personality traits and attitudes.

Many nonverbal signs and symbols do not involve movements, yet they carry meaning and have an impact on communicative effectiveness. In addition, these cues relate to physical appearance and the clothing we wear. Physical attractiveness plays a vital role in human communication.  What is it about the body that people respond to? What do people consider in declining who is attractive? Some characteristics that call attention to individuals are body shape, skin color and quality, smell, hairstyles and facial hair. For the example, clothing transmits a message. Because people see a person’s clothes before they hear his or her voice, clothing is important in the first impressions we communicate to others.

Actually, touch may be the most basic or primitive form of communication. For example, one of our first contacts with life itself comes through the doctor’s hand, and, as newborn babies, the touching that comes through diaper changing, feeding, bathing, rocking, and comforting combines in the earliest manifestation of affection and tenderness. Furthermore, touch remains a crucial aspect of human relations throughout our lives.

Nonverbal vocal sounds communicate how something is said rather than what is said. Paralinguistic cues include:

May be shrill, muffled, childish, nasal, breathy, resonant, melodious, among others.

These qualifiers involve changes in pitch, volume, and rate. For example, raising one’s voice and speaking louder and faster convey agitation. In contrast, slowing down, speaking softly, and lowering the pitch can suggest confidence, determination, and decisiveness.

The study of how human beings use space to communicate is called proxemics, a term Edward T. Hall coined to suggest proximity, the state of being near. The way people use space is determined by their age, sex, status, and cultural orientation. However, the use of space differs across cultures.

Each culture has its own concept of time. All cultures take their own time system for granted and expect other cultures to operate with the same perspective on time. Thus, misunderstandings are inevitable. To function in a foreign country, we must know its approach to time. To Edward Hall the principle difference between cultures is whether they are monochronic or polychronic.