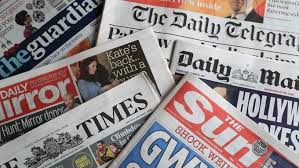 By reading English language newspaper we can improve our English or reading skill. We also can learn how to catch the main idea of a story, understand the all important opening sentence of a news story, or find the story’s essentials details.

Furthermore, the first paragraph of a news story in a newspaper is the lead. It almost always gives us the story main topic and most important facts.

Focusing on the Beginning

We usually find the most important point of a news story in the first paragraph (called ‘the lead’). So, this is the place to begin our scanning. Look for words we understand. Two or three key words will often be enough to catch the main idea.

HONG KONG (Reuter) __Vietnam yesterday angrily rejected American charges that Vietnamese diplomats were involved in aspionage and warned that such accusations could jeopardize US attempts to normalize relations.

This is clearly a story about Vietnam and the United States. From the word angrily you can be quite sure that it must report some problems between two countries. This is enough for successful scanning, but if the subject doesn’t interest we scan other stories until we find one that does.

When we have found an interesting story, we should read quickly through it, we are scanning the entire story in much the same way we scanned the lead. So, we have to find out as many important facts as you can without using a dictionary.

This will give us a general understanding of the story which help us greatly when we back and read the story more carefully. Here is the example of a story and try to find some facts we discover in two minutes.

After reading the news, we should be able to find out the following:

Q: What kind of treasure?

A: a silver and gold chalice and other items.

A: an unnamed amateur

Q: Where was it found?

A: somewhere in Ireland

Q: When was it found?

A: two weeks ago

A: in the British Museum

Finding the Subject and the Main Verb

Above all, in many stories the subject and the main verb come at the very beginning of the sentence.

The headmaster has announced …

In addition, sometimes the newspaper writer add description and puts one or more adjectives in front of the subject.

A young man was killed …

Next, the writer may have to give even more information about the subject. The writer does this by putting the information after the subject and before the main verb. Usually such sentences are easy to recognize by commas or followed by a clause beginning with the words who, which, or that.

However, sometimes in English, it is possible to leave out the first words of a clause that follows a noun. most often these missing words will be who or which and a form of the verb be.

A woman who was said to be despondent over her husband’s heavy drinking, jumped into a canal with her three children late Friday.

It is quite easy to make the first verb in such sentences for the main verb and thereby misunderstand the story. when we read these sentences, therefore we cannot translate word by word. We must keep reading until we are sure that we found the main verb.

In other way some lead sentences begin with a phrase that does not contain the subject.

Perth, Western Australia (Reuter) __Watched by hundreds of horrified picnickers, a 25 years old woman burned herself to death in a Perth park Sunday by pouring petrol over her clothes and setting it alight.

Main idea: A woman burned herself to death.

A Phrase that Begins with a Past Participle

TOKYO (AP) __Shaken by the US Soviet confrontation over Afghanistan, Japan is gradually accepting the need for more defense spending, and is likely to give in soon to growing American pressure for a token defense buildup, a US official said yesterday.

A Phrase that Begins with a preposition

MOSCOW (UPI) __With the Soyuz 26 cosmonauts watching from orbit, the Soyuz 27 crews undocked from the Soviet Union’s space laboratory and descended to a soft landing on earth.

Testing Your Understanding of the Lead Sentence

The other examples of understanding the lead of sentence in the English language newspaper are:

LAKELAND, Florida (UPI) __Charlie Smith, believed to be the oldest resident of the United States at age 137, was hospitalized Wednesday complaining of shortness of breath but was reported in fair condition and resting comfortably.

LAKEPORT, Michigan (AP) __A missing guard was arrested yesterday in the theft of more than 1.5 million dollars in cash he was assigned to protect, state police said.

The conclusion is the lead catches the readers’ interest and tries to make them read further.

The next writing will discuss about how to read the rest of the news story.